[This article/page was published a few years back. But, most of the issues touched upon have a great relevance even today – Wg.Cdr JP] 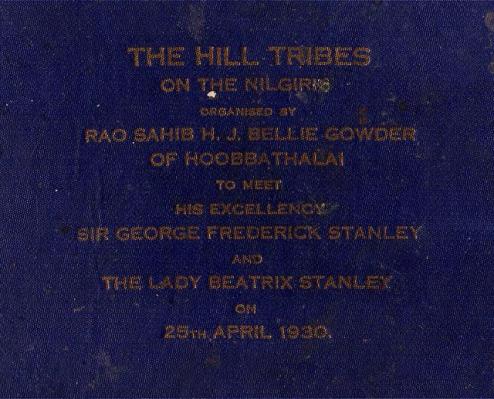 Many Badagas are under the mistaken impression that if they are brought under the “Scheduled Tribe”, it is a degrading step. I do not think so. Badagas are one of the ‘ORIGINAL’ tribes of the Nilgiris along with Todas, Kothas and Kurumas.

The enormous improvements achieved by Badagas in all social factors, in spite of many impediments, should make us feel proud. This success is attributed to one SINGLE factor. Education. For that we must remember with gratitude the pioneer, visionary and philanthropist Rao Bahadur [Hubbathalai Jogi Gowder] Bellie Gowder who built the first School for Badagas – along with free hostel accommodation in Hubbathalai and his son Rao Bahadur HB Ari Gowder who fore saw that in educating a girl, indeed we are educating a family and hence insisted on education for girls and encouraged it fully.

March, 2008 : Why the latest Tamil Nadu website, http://www.nilgiris.tn.gov.in/
on the Nilgiris is getting on my ‘goat’ is the fact that till recently Badagas were shown as a tribe along with Todas, Kothas, Kurumbas and others. In fact, the following photograph displayed in my website www.badaga.in [ see the page https://badaga.wordpress.com/badaga-dance/ ] was taken from that portal.

But the same has been removed from http://www.nilgiris.tn.gov.in/ now.

Mind you, calling Badagas as a separate tribe and included with others,does not automaticaly give the status of a schedule tribe. And hence, the champions among ourselves who are opposed to ST status, need not feel small

The above website of TN govt is accessed by many tourists mainly foreigners and they are agast not to find anything on or about Badagas.

Many readers may not know that Badagas were listed as a separate entity in the CENSUS till 1981 but after, that courtesy some idiots, Badaga are grouped under Kannada (speaking people). What this has done is the huge loss of information of knowing how many Badagas are there [along with all other details like literacy rate, gender wise population etc]. That, SIMPLY MEANS BADAGAS DO NOT EXIST.

What is highly hurting is the fact we have many Badagas including a minister, MLA, many ex-MPs & ex-MLAs who seem to do nothing. Can they not, ATLEAST, shoot out letters to all concerned ? Or, have they forgotten the fact that they are getting a fat pension because of us? I know of an EX-MP who writes to the local police station every now and then emphasising the EX-FACTOR when it comes to grabbing others land for her own kith, but does nothing about the community welfare.

What about the many self appointed leaders of Badaga community, including ex-MLAs, who claim that they are very close to the DMK party leadership ? Why can’t they initiate some action and show the same enthusiasm when they ‘fleece’ the public for money in the name of donation for the party [but lining their own pockets]?

What about many senior government officers, including the only IAS officer who can influence the party in power to take some action ? Firstly, the IAS officer should correct his mother tongue being Badaga and NOT as Tamil as is given in the government official info { a fact I have mentioned in FIRST BADAGA also}.

It is a well known fact that late Rao Bahadur HB Ari Gowder would seek an immediate appointment, to highlight the problems concerning Badagas, with the Collector as well as the State ministers of his time including the great Rajaji who was the CM. Do you know that Rajaji had to apologise to Ari Gowder when he (Rajaji) was delayed for an appointment and Ari Gowder, as MLA, threatened to walk out. I believe, many Collectors of the Nilgiris, would not only address Ari Gowder’s concern expressed over the phone but would consult him on any issue on Badagas.

The local correspondent [for the Nilgiris] of one of the most widely read national news papers of India, ‘THE HINDU’ is a Badaga. Can we request him to highlight this issue in his columns?

Why are we keeping quiet ? Why are we behaving like ‘HEBBATHES’ – cockroaches- running away from light and hiding ourselves in darkness??

I have very strong views on this subject. Before I elaborate on them, I feel that we should first of all be identified as BADAGAS which is not the case as SANTHOSH has rightly mentioned in www://badaga.com “. . our community’s name is not in the list of communities under the BC category. In fact, it is not mentioned under any of the categories.”

I also agree with the views of ‘bhojvija’ who feels that ST tag for Badagas is humiliating… “…Badagas living in cities and doing/completed education in cities and are upper middle class family and for them it’s not at all a matter if Badagas are non ST. But we have to talk about our entire badaga community. For example an SC/ST guy simply getting govt job if he passed just degree. And government providing more facilities like scholarship, free hostel, books, notebooks etc… In our community so many have stopped their education due to lack of economical support and their entire life style also has been changed as they have to work just as ordinary labourers…. “.

Most of us feel that getting ST status is demeaning and meant mainly for getting admissions to educational institutions and getting jobs easily. The truth could be entirely different.

Even in our own district of the Nilgirs, do you know that we are not taken as a separate community as BADAGAS but are clubbed with other non tribals??? That is one of the reasons why the exact number of Badags is not available? When census is taken Badags are clubbed under Kannadigas / others.

I am afraid ,if this sad state of affair continues, after a few years, we will come under the “extinct” community.

Being from an above average Badaga family – economically [God’s grace], having done my professional studies of engineering and business administration etc and having served in the defence services and having mostly lived in big cities like Delhi, Bangalore & Madras for the past forty odd years or educating my children in the elitist schools, colleges and now abroad, I had no occasion to seek the tag of BC.

BUT, NOW THAT I VISIT AND INTERACT WITH OUR PEOPLE IN OUR HATTIS ON A REGULAR BASIS, I AM CONVINCED THAT FOR THE UPLIFTMENT OF OUR COMMUNITY AS A WHOLE (as opposed to city based creamy layers) THERE IS AN URGENT NEED THAT :

Nearly eighty years back, Nakku Betta Leader, Rao Bahadur (Rao Sahib then) Bellie Gowder on whose invitation the Governor of then Madras Province visited Hubbathalai Village was presented a memorandum on the Hill Tribes of Nilgiris which included Badagas, Todas & Kothas. In a grand cultural show organised on that eve Badaga dance was presented [by school boys] in their ‘DODDA KUPPACHA”.

Rao Bahadur Bellie Gowder, incidentally, was not only the leader of Badagas but represented as leader of all the tribes of Nilgiris (a relatively remote hilly & jungle area and unexplored at that time). The folder he presented to the British Governor, on the occassion of his vist to Hubbathalai [on the invitation of Rao Bahadur Bellie Gowder] containg some rare photos of all the tribes of Nilgiris INCLUDING BADAGAS

What do you think?

Let us be FAIR to the fair gender

As I sit down to ponder over the ‘burning issues’ that are bothering the Badaga Community, three issues pop up as very important. The FIRST one is the inequality with which we seem to be treating our women today. Though, this malaise is affecting all the communities in our country, I am concerned that the Badagas who treated their women folk with so much respect and love in the olden days, are slowly but surely pushing them into the second class citizens category.

In earlier days, the girls were married off at a much younger age [Kannu Hoottadha Henga] but with the firm understanding that they [the girls] could seek divorce at any time if there was matrimonial disharmony and that they would be accepted back into the society without any blame and reservation. Getting married again was no big issue. She, always, had the backing of her parents and her brothers as ‘guru mane’ gave unflinching support in all respects mainly financial. This was probably the main reason that the girl children were not given any share in the property.

Being brought up in an atmosphere where complaining and cribbing were not considered as routine, the Badaga women accepted life as it came and were always ready to sacrifice their own comforts. But then, the Badaga men, at least a majority of them, were, also, simple and hard working. Then came the curse of ‘drinking’. And with that, the problems and troubles of Badaga woman increased many fold and took a dramatic turn for the worse. The men folk took full advantage of the vulnerable nature of the women who had the additional burden of bringing up the children. Here, it must be mentioned that a Badaga girl was expected to be pregnant within a few months of marriage and invariably, there was a child to ‘celebrate’ the first wedding anniversary. Followed, of course, with many more children. “Mane thumba Makka” – House full of children – was part of the ‘blessing – Harakkay’.

This put the women in a very disadvantageous position. With many children, divorce was not a choice. Thus, they accepted suffering without complaints.

Education changed the fundamental thinking of girls. Though still faced with the compulsion of early marriage, many girls accepted ‘two children per family’ norm as the best option. But, there was and is still discrimination when it came to giving them share of property. The present law of the land is clear. Girls should get EQUAL share of the property.

The Badaga thinking, mainly mandated and manipulated by men, has found the clumsy excuse of not giving share of the property to the girl children by quoting outdated traditions. This is the problem.

I am convinced that one of the most important and burning issues facing us today is GIVING EQUAL SHARE TO THE GIRLS AS THE BOYS. I am firmly of the view that we have to resolve that we will give equal share to the girls if we have to save our community from falling into disgrace. Let us take that resolution, HERE and NOW.