Badagas usually grow vegetables in their small patch(es) of land called ‘HOLA’ (see photo) for their regular use apart from other commercial crops like potato, cabbage, carrot and cauliflower etc. These would also include many varities of beans, peas, greens, corn etc. Every variety of avere(bean) has a specific (sometimes unique) badaga name. No Badaga wedding meal is complete without ‘Avare & Gaasu udakka’ [beans & potato curry]. Incidentally, Badagas do not serve non-vegetarian (meat) dishes on the wedding day , main meal is called – ‘maduve hittu‘. Another great trait among these simple peasant people is called ‘nattu‘ – a sort of gift (again mainly the home grown vegetables & grains) given to relatives, friends and guests.

>>Tea Leaves… the crop on which Badaga ‘economy’ depends so much..

The agricultural produce, food, dishes, eating habits and some interesting recipes of Badagas.
Apart from badaga.org, I am thankful to N.Bellie, R.Ramachandran (Kekkatty) and others for their imputs. A lot of info is from Prof.Paul Hockings’s books.
I have tried to discuss and describe, not only of authentic recipes on Badaga dishes but also on their agricultural produce, known in Badaga language as BAE – like for example Badagas used to grow wheat, barley, millet – GHODUME, GANJE, ERAGI, BATHA –etc but have almost completely stopped now.

The food, eating habits, preparations of some dishes as well as the ingredients used are covered. along with the methods used in cooking (like in a mud pot known as MADAKE in traditional fire place – OLE)

It must be mentioned that though many masala powders are available in the market, the Badagas use a specially prepared curry powder known as ‘ BADAGARU MAASU HUDI’ in their preparations.

I remember my childhood days when the dried GANJE / GHODUME (barley/wheat) used to be spread in the fore court of the houses called KERI (street) , between two groups of Hatti HEMMAKKA (ladies) squatted opposite to each other with GANJE DHADIS (sticks of about four feet long and an inch thick) systematically & alternatively beating to remove the chaff. The rhythmic ‘tak tak’ noise would be accompanied by some folk lore Badaga songs. This is known as GANJE SACHODHU.

How can anyone forget the GANJE that would be HURUTHU – fied (fried) in a HURI MADDAKKE (mud pot with a hole on its side) through which a HURI KOL (a short stick with cloth tied at one end as a ball) would be inserted and the contents stirred constantly for uniform frying? 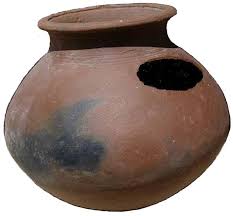 The fried ganje called GANJIKKE would be taken with BELLA (jaggery) and THENKE (coconut). The taste of this would increase if hurutha keerai is added. Used to be a very common snack during the “kodai” season when no one can venture out on account of severe wind and rain.

This ganjikke would be powdered in a ‘ BEESA GALLU ‘ or ‘BEESARAN KALLU’ ( grinding stone ‘flour mill’) that was a permanent feature in the EDHA or NADU MANE and stored for furture use. People who go on long journeys (in olden days travel was by foot only) took this powder along with them, a very handy and healthy meal. This powder would be mixed with hot water to make a gruel. Salt and jaggery could be added to taste.

(Buttermilk) MAJJIGE [ also known as – Pay’ray’] KADANJODHU or HAALU SORAKKODU( milk churning ) used to be a routine job and great fun for the children in trying their hands. The BENNE (butter) and THUPPA (ghee or clarified butter) are very healthy. When taken with ERAGI HITTU (wheat ball in the size of cricket/hockey ball), it is very tasty.

POTHITTU (wheat dosai) has to be an all time favourite of Badagas. During SAKKALATHI HABBA (the last festival before HETHAI HABBA ) POTHITTU with THENKE NEERU (coconut water) is the main dish.

There are many side dishes like SOPPU, BARRATHA AVARE , GAASU SANDEGE Then the question of how to ERAGI HITTU HOKKUDU (make wheat ball?) or make HABBA (festival) specials like BADE (vadai) KAL KAL (sweets made out of maida) etc etc.

I was pleasantly surprised to know that Taj Garden Retreat hotel in Coonoor (in the Nilgiris) serves some exclusive Badaga specials like THUPPADITTU & OTTU KUDI curry.

“Since the British lived here for long, there was a mix of the English food with the local ingredients – mostly, the native Badaga food. Thuppathittu, is an example. That makes it different from the typical English food…..For vegetarians, … Ottakudi Gassu poriyal ( a typical Badaga food of potatoes, spices and bamboo shoots), …. Avarai Uthaka (traditional Badaga speciality), Khuni khichri (spice preparation) and Gassu Dhotti (boiled potato preparation)”

Rasam is called MAASU NEERU ( milagu thanni in Tamil that has found its way into dictionaries).BATHA HOKKUDHU was done by elephants in ancient period, and till a few decades ago, by 50 to 60 bulls and cows brought from the plains (mainly Avinashi near Coimbatore) to the villages and mostly done during night time. One of the methods/processes in storing/pruning our farm produce ERAGI (millet) is known as ” ERAGI METTODHU ” (Stamping).

This is done on the green ERAGI stems freshly harvested from the fields. A bunch of this is put indoors on the floor and squeezed by bare feet . This is done mainly in the night in the EDHA MANE (middle room) and stored in the DHARSAE PETTI / BALLA (storage basket) which is located on top of the HAGALAE (permanentally fixed long wooden plank from wall to wall that also served as a huge cot) in the EDA MANE . See the illustration above.

BALLA or BALLA PETTI is a big cylindrical basket for storage and fixed to the wall/floor by cow dung. There would be hole at the bottom to take out the grain. The hole is sealed with cow dung and removed whenever required. Smaller storage basket is called KUKKE. Depending on the usage they are known as BENNE KUKKE (butter basket), HUYIGAL KUKKE (multi utility basket), DODDA KUKKE (big basket) with a handle to carry mud to clean the temples before puja in the olden days and of course, the GANJIKE KUKKE with smaller baskets attached to a central bigger one used in SAVU (funeral) rites. MAKKIRI was a larger basket used to carry food items to fields (HOLA) and on long journeys.

BESAKATTI is a large flat basket, used for drying grains, hung above the fire place/ hearth ( OLE ) in the inner room (OGE MANE) of a Badaga Home during earlier days.The basket is suspended from the beam with wire rods /ropes (KANNI).

There are a lot of DODDARU SHULOKAs on BALLA (storage container for grains). A couple of them are listed here :

One of the favourite dishes of Badagas. No Badaga wedding would be complete without this curry

Clean and wash the chicken pieces well. Marinate the chicken in maasu hudi – curry powder [see below to learn how to make Koi Udakka maasu hudi], salt and turmeric.

Warm the spices (cumin, saunf, kas-kas, cloves, cinnamon, and cardamom). Grind them in a mixer along with ginger and garlic and keep aside.

Peel the small onions, wash and cut the larger ones into 2-3 pieces and fry in a little oil on low fire. Keep stirring the onions so that they are uniformly and thoroughly fried. Remove from fire, cool and then make it into a paste in a mixer.

Mix the onion paste with the marinated chicken.

Heat oil in a pan, add mustard seeds, curry leaves and the onions. Fry till onions turn golden in colour. Add the masala-ginger-garlic paste and saute. Then add the marinated chicken and water (according to how thick you want the curry to be). Cook for 20 – 25 minutes or till chicken is done.

It is better to use a pan to cook the curry than a cooker as the flavour of masala and spices usually does get absorbed into the chicken when a cooker is used.

I am grateful to Ms. Anitha Gokul for accepting my request to write / give the recipe for the traditional BADAGA CHICKEN CURRY as well as the preparation of CURRY POWDR – the ’secret weapon’ of good Badaga Cooking)

chillies – 1kg , corriander seeds -2 kg , cumin seeds (jeera) – 250gms ,pepper – 50 -100 gmsThere is no need to add other spices like saunf, cloves, etc. They can be added while preparing the curry. Roast the chillies, corriander, cumin and pepper seperately in a hard bottom pan on low fire. The colour of the spices should turn dark as our gravies are usually dark (nearly black) in colour. Be careful not to over-roast. Mix the ingredients together and get them ground in a grinding or pounding machine. Pounding is a better option inorder to maintain the flavour of the spices. Cool the masala powder as soon as after it is ground. Seive and store properly. This masala can be used for more than a year if stored well.

Roast all the ingredients (uniformly) separately in a hard bottom pan on low fire. Wash and dry curry leaves in shade and lightly roast them. Mix all the ingredients together and grind or pound in a machine. Cool the masala as soon as it is possible after grinding, on newspapers spread on the floor. If not cooled the heat in the masala may burn it, thus affecting the flavour and colour of the maasu hudi. Sieve and store properly.
|:|:|:|:|
BADAGA CHICKEN SPECIAL

(by Brent Thompson says the recipe originally comes from Poultry Advisor (a magazine) published in Bangalore, in 1970. The recipe was attributed to Mrs. Seetha Mahalingam from Ooty. Brent’s notes and the original measures for the recipe appear in brackets. Also, see badaga.org)

Method1. Heat oil in a heavy bottomed vessel; add the mustard seeds. When they crackle, add the sliced onions and fry until the onions turn a golden brown.2. Add garlic-ginger paste (mix I) and fry about 2-3 minutes.

5. Cook uncovered until the chicken is tender, adding water if it gets too dry – be careful not to add too much water, as it dilutes the flavor. The color of the broth will gradually deepen and turn brown as it cooks.

6. Optionally, at the end, add a few cashews and cook for another 3 minutes .