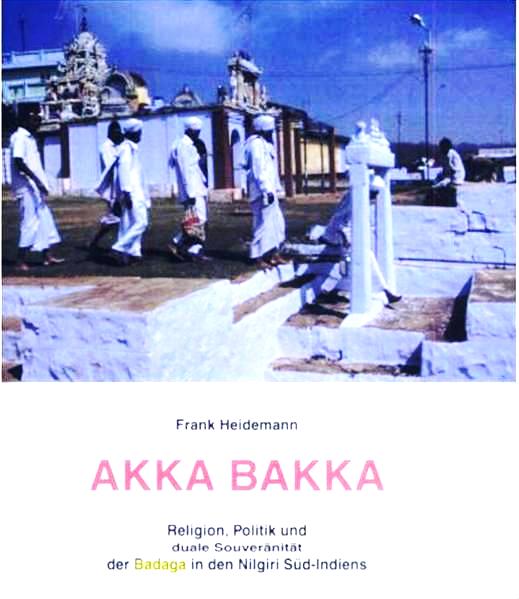 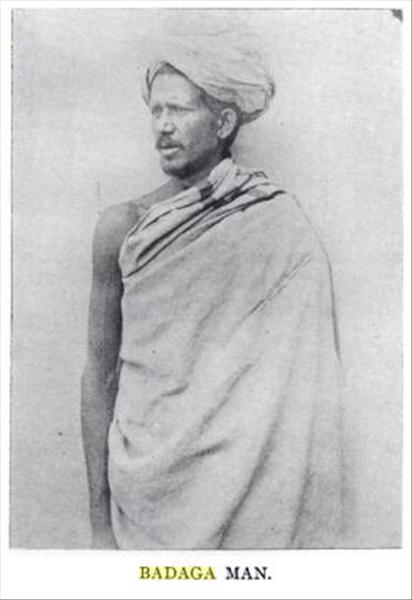 The picture of a Badaga Man [see the Badagaru Seele he has wrapped around that has distinctive borders and has not changed in centuries ].

This photo taken in 1908, while showing many men shows only two women. Notice the roof of the house in the background- the complete absence of tiles (Odu)

Photo (drawing) from :<strong>Counsel from the Ancients – ‘A study of Badaga Proverbs, Prayers, Omens and Curses’ by Prof. Paul Hockings

(Notice the typical Badaga Jewellery the bride is wearing)

This is the view of Edha Mane or Inner room. All the edha manes were of the same design in typical Badaga Homes in olden days

Rao Bahadur Bellie Gowder with British Engineers and workers at Bridge No.33 between Coonoor & Mettupalayam. Bellie Gowder was involved in laying the Nilgiri Mountain Raiway, now WORLD HERITAGE, a hundred years ago. He was conferred with the title RAO BAHADUR for carrying out the excellent but challenging contract work of building this unique railway system in inhospitable forest area that also involved in cutting tunnels through rocky hills as well as building many bridges with sheer guts. He employed human power to lift the racks & rails and remove the rocks and boulders. Many of his workers were BADAGAS who addressed Bellie Gowder as BELLIE MAISTRY

[Parents of the author of this website Bellie Jayaprakash]

Mr.B.K. Bellie Gowder was one of the few educated Badagas who studied upto VIII in St.Antony’s School, Coonoor and completed his SSLC (School Final) from St.Michael’s High School, Coimbatore in early 1900s. There was no ‘regular’ high schools in Nilgiris in those days.

Water Colour painting by his son, Bellie Jayaprakash (that is me)

Kerbetta Madha Gowder – Probably the only Badaga who wears the turban like a sikh. Incidentally, he is very fluent in ARABIC and teaches many muslims from Nilgiris who go to Haj

Late Kerban Bella Gowder, One of the golden Voices of Badagas, whose rendering of SAVU songs can make even the stone hearted to cry

Drawing &photos- from Paul Hockings’ books ‘Counsel from the Ancients: A Study of Badaga Proverbs, Prayers, Omens and curses’ and ‘Mortuary rituals…’

These rare photos are also displayed  at my blogspot

Click on the pix to see Rare Photos of Badagas