4th December is the 121th Birth Anniversary of Ari Gowda

[above – text] From the book ” A BADAGA – ENGLISH DICTIONARY ” by Prof.Paul Hockings and Christiane Pilot-Raichoor]

Rao Bahadur H.B.Ari Gowder, the first Badaga graduate & first Badaga M.L.C & M.L.A for a long time  including the British time. He brought many reforms in/to Badaga Community including ‘prohibition’ (no alcohol – kudi) to Nilgiris in British days itself.

Ari Gowder was associated with the Nilgiri Mountain Railways, now an UN Heritage,  right from the time this great and beautiful track was established in early 1900s till his death in 1971. In fact his father Rao Bahadur H.J.Bellie Gowder was contracted by the British to lay the mountain railway from Mettupalayam to Ooty. Also, probably, Bellie Gowder and Ari Gowder are the only father -son duo who were conferred with Rao Bahadur title in India, though Ari Gowder hardly used the title being a great nationalist.

‘He was not associated with any political party  but was a true representative of the people, a powerful orator and  welfare minded  social reformer’ – says A.Kari Gowder [“Prongadu Seeme Welfare Association”] in his booklet published in  May 2006.

He was the President of the Nilgiris District board in 1930s and 1940s and carried out a lot of welfare measures for the upliftment of the residents of the hill district, mainly tribals in those days. To remember his contribution to the society, the bridge connecting Tamil Nadu [then Madras] state and Karnataka [then Mysore] state, built in 1936, is named ARI GOWDER bridge (above pix).

H. B. Ari Gowder’s name figures in the Famous Madras Christian College Alumni list along with people like Sarvepalli Radhakrishnan

Being a great philanthropist he had done a lot for the betterment of Badagas. He was the one who established Nilgiri Co-Op Marketing Society at Ooty, to save the small farmers-especially Badagas- from the exploits of middlemen & traders at Mandis in Mettupalayam. He was the President of NCMS for more than 30 years, till his death and NCMS was considered one of the best co-op societies in India during his days. By way of acknowledging his significant contribution his bust was unveiled on May 25, 1987, in the multi-purpose hall of the NCMS.
Since he donated the land, the road in front of Mambalam Railway Station in Chennai (Madras) is named after him (known as Arya Gowder Street). Both were held in great esteem and considered as the ‘ Uncrowned King ‘ of Nakku Betta by Badagas.
Rao Bahadur H.B. Ari Gowder is known to have sent his assistant HAIKA MATHI in 1940s and 1950s to all over the Nakku Betta to know about problems of Badagas, but,unfortunately there are no written records available / traceable
Ari Gowda is held in great esteem and was considered as the ‘ Uncrowned King ‘ of Nakku Betta by Badagas. In fact, May 15th,  Badaga Day is celebrated  as Ari Gowder day 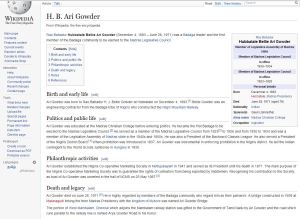 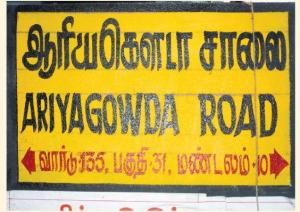 The story of Ariya Gowda

The chances of anyone travelling down Ariya Gowda Road in West Mambalam, and stopping to wonder about the identity of the man who gave the thoroughfare its name, are slim.

For when you are on Ariya Gowda Road, you are focused on getting out of the road alive, given its traffic.

He was not Ariya Gowda. He was HB Ari Gowder, a great visionary and leader of the Badaga community of the Nilgiris. And his life, as gleaned from various sources, including a 1935 Who’s Who and the internet, makes for interesting reading. Rao Bahadur Hubbathalai J Bellie Gowder, made his fortune in laying the tracks of the Nilgiri Mountain Railway, which was completed in 1908.

His wealth made him a leading member of his community, and his clansmen came to him for advice on several issues. Bellie Gowder founded a free school in his native village, Hubbathalai, an institution that still functions. He passed away in 1935. Bellie Gowder’s son, Ari, was born in 1893. His father ensured that he was educated in the modern sense and he graduated from Madras Christian College.

When the Rajaji government introduced Prohibition in 1937, he led the challenge of enforcing it in the Nilgiris, of which area he was also the first non-official to become District Board President. Ari Gowder was also active in the Scouts Movement. Another contribution of his was the establishment of the Nilgiris Cooperative Marketing Society, which eliminated the stranglehold middlemen had over the simple mountain people.

He was also a Director of the Badaga Land Mortgage Bank. While the sympathies of most of his community lay with the Congress, Ari Gowder, given that he was President of the Backward Classes League, leaned more towards the Justice Party, which was active till the 1930s. That probably explains the road in Mambalam being named after him.

Neighbouring Theyagaroya Nagar or T Nagar, developed in the 1920s when the Justice Party was in power and most of the roads, parks and streets there are named after its leaders.

Legend also has it that a large chunk of land adjoining the Mambalam Railway Station was his, which he donated for developmental work. Like his father, Ari Gowder too received the title of Rao Bahadur from the British Government, in 1943.

In 1946, Ari Gowder was defeated in the Assembly elections. But in 1952 he contested successfully as an independent. He was to remain an independent for the rest of his career.

He passed away in 1971. How did Ari Gowder Road morph into Ariya Gowda Road? And should it not be just Ari Road?

H.B. Ari Gowder, a well-known leader of the Badaga community, the largest indigenous social group in the Blue Mountains, was remembered on his 121st birth anniversary on December 4. Some members of the community gathered at the Nilgiris Cooperative Marketing Society (NCMS) here and garlanded a bust of the leader installed near the threshold of the Society’s multi-purpose hall. Among them were the president of the Society Kannabiran and T.M. Kullan of Tribal Solidarity. Participants pointed out that Gowder has for long been considered as the uncrowned king of the Badagas. A widely respected philanthropist, he was instrumental in the NCMS coming into being in the 1930s to protect farmers from middlemen and unscrupulous members of the mercantile community.

Members of the Academy for Badaga Culture (ABC) Trust led by its president Manjai V. Mohan also paid floral tributes to the leader.