Yogesh Raju from Kadasole has been working on a Badaga (he prefers to say Badagu) script for the past fifty odd years. In fact, the script was developed in 1968 itself and was taught in Mael Hosattai of Mael(Mel) Seemay. He is convinced that Badaga – Badagu is an unique Dravidian language by itself (as opposed to being a derivative of Tamil or Kannada, as some over enthusiastic supporters of these languages claim it to be. He has been propagating/teaching Badugu Script ever since.

Badugu Grammar was ‘written’ in two parts eleven years back and was released in a function at Coonoor in a press meet. The script appeared in the Tamil vernacular news paper ‘Dina Thanthi’ in 1991 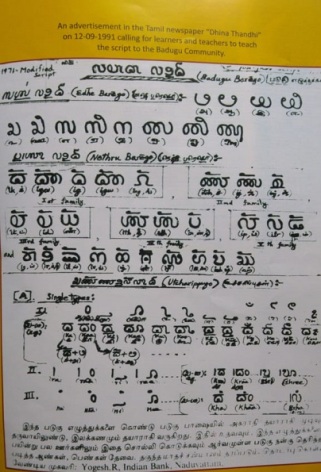 A language without a script is bound to face extinction sooner or later. No question about it. Earlier, why even today, many Badagas communicate with each other in Badaga by using the scripts of English or Tamil, in which most of the educated Badagas are proficient with. The draw back of using these languages is that there are no equal or suitable letters (alphabets) to truly bring out some sounds/words used by Badagas.

For example, Ha which is extensively used in Badaga does not have an equivalent in PURE Tamil, though in today’s Tamil, ஹ is freely used. But unfortunately, some professionals, have started using ah – அ instead. They have gone to the extent of justifying this by corrupting words like hatti (village – ஹட்டி) as atti – அட்டி. A sure way to destroy the originality of Badaga.

In English, there is no equivalent to  La – ள or Na – ண which is extensively used. oLLIththu – good or haNa – money etc

We wish him success in his endevour – Wg.Cdr. Bellie Jayaprakash 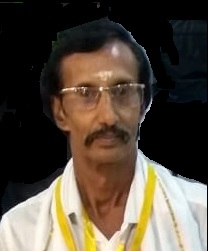 BADUGU BARE(Y) – Badugu Script, was conceived in 1968. Now it is reaching a greater number that is growing faster.

The Badugu bare was born 50 Years ago, at Mel Hosahatty at southern side of Nilgiris, in Kundhe Seeme though I belong to Thodhanaadu seeme.  Then developed other letters in the course of time (they letters were not developed in a day or two); after long research and avoiding any clash between any letters and avoiding any confusion when writing with speed and considering the psychology and the writing ability and pattern of the young children the script was developed further and experimented. in 1968 Itself, by teaching younger students and conducting tests.

All these happened at Hosahatty- some names I remember: Markanda at kunda, Bheema, Mahalinga, Krishnamoorthi (cousin of GuNa magesa, VC of a University in Gujarath), etc. (one interesting incident: one student(4th) asked me why there are two ‘in’s in Tamil and why they call one ‘in’ as ‘indh’ when that ‘in’ comes in between a word and why this confusion in Tamil. I wondered at his intelligence and it helped me in analysing the language. I. told the ‘students’ that ‘we are learning our Badugu and should forget about other languages when studying Badugu that our Badugu script has only appropriate letters for the sounds of Badugu language.The beauty is they studied in 3 hours and when I dictated some words (which I did not teach) they wrote them correctly!). 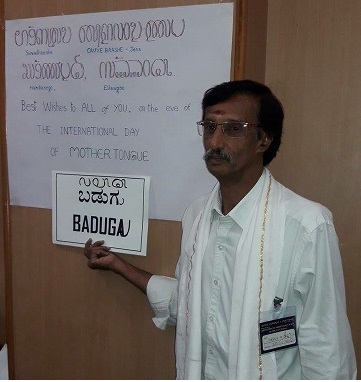 Then in due course of time the script was corrected for shortcomings and  shape given with writing flexibility- this took some more time, about 6 more months. But at that time the scripts for the words ‘QWA’ and ‘GWA’ were not there, it was Introduced in 1970 only.

After the research in all the ‘sabdha’ (sounds) of Badugu words, by which time Ii had collected and arranged some Badugu words (say around 1000 words). IN 1991 this script was published by a friend from Nandhatty-Gudalur who is a correspondent of  Tamil Daily “Dinathandhi”.

Seeing this 15 gentlemen (14 from Kotagiri area and one Tamilian lady from Avinashi) studied it through correspondence. We used to write in inland letters and only in Badugu script!! (the name in the address were also written in Badugu apart from English); I still preserve them (please note that at that time there was no tv and mobiles !!!)

Later on I worked for five years for collecting old and rare Badugu words from very old elders – some words like ‘banda’, ‘mammukoosu’, ‘sisukoosu’, ‘burude’, etc,….from Maelseeme (in Hasanur, bordering Karnataka) also. (25yrs back my father, KP.Raju, a freedom fighter, established a school there and my brother (Ganesh) was teaching there and I also used to go on holidays and taught in that school).

Now around 7000 words have been collected and arranged in alphabetical order. Then started writing ‘Maaththartha’ (dictionary); after writng about 50 pages I felt the immediate need for ‘Lakshana’ (Grammar) and worked for 4 to 5 years , wrote two parts (completed in 2010) of GRAMMAR .

After this, the  script was posted in the Face Book, last year(2012). Because of the efforts taken by BWC (convener: Singan Sathu), more than two thousand people around the world are studying our script through internet. Then many youngsters who studied it joined and we under the banner of BLPG (which was instrumental in the formation of BMS) started teaching the Badugu bare at villages in weekends (so far around 50 villages were covered).

Now FB group BBB has been created and the website- http://www.swadhandhrabadugu.org  started for Badugu and the related history. In April, 2014, we conducted free 3 day camp at Reach Matriculation school, Coonoor, with the help of Prakasam Malla Gowder. Also conducted classes at cities like Coimbatore and Chennai with the support of Badagar Welfare Association, Chennai, and at Gudalur- Gudalur Badugar Nala Sangha, apart from many workshops conducted.Such classes are continuing.

I came out of Indian Bank on VRS, for the purpose of this work and also for services under BBB and BMS. Also visited UAE, at the invitation of Dubai Baduga Association, and taught Badugu script there in Dec. 2014.

Singhan Sathu (of BWC, and AGM of Corporation Bank, and the previous President of Erode Baduga Association) introduced the Badugu script in face book. BLPG started; then BMS started.Some of the people who are pillars in Badugu teaching are:- Attuboil Raja, Senthil Kerappadu, Harihara Emarald Bhoja, Nijanth G Halagowda, Valli Aanandh, Pavithra, Aneesh, Ajeeth. Sivaraj (Selakore) a 1991 Correspondence student (now a Hindhi and Badugu teacher) has taken the mantle of teaching in many villages with a team, all with the blessings of HirOdayya, the Almighty.

(From 2016 an exclusive FB group – BADUGU BARE(y) and BAASHE.- has been started. It is dedicated only for Badugu language and Script. Lessons and Videos are posted regularly).