What is the Size of the Badaga Population?

A quick Internet search suggests there is no authoritative figure for the total of Badaga speakers — and language is the best indicator in earlier censuses as to who was a Badaga and who was not, since virtually no one spoke that language unless they were Badagas in culture too. What one does find in the Internet today is some people claiming there are 135,000 and some claiming 400,000 Badagas. Claims for an unusually large Badaga population might be useful in making certain political arguments, but they appear not to be based on any facts. I would like to speak about the issues that lie behind this discrepancy, however, without entering into political topics.

Very early counts of Badagas were probably not so far from the truth. Thus B.S. Ward’s count of 3,778 Badagas in 1821 might have been a slight undercount, but even if they were under-enumerated by 10% (a pure guess on my part) the real figure would still be little more than 4,000. Slowly improving diet and public health over the 19th century in the Nilgiris District could therefore reasonably lead to the figure of 19,476 in the “official” census of 1871, half a century after Ward’s count (which was done for the administration of Coimbatore District).

Moving on a whole century to the censuses of independent India, we find in 1971 a count of 104,392 Badaga speakers. But after this things seem to go awry, because we get no official figure in the 1981 census. So far as I know this was a result of a political decision at some high level: to treat the Badaga language as a dialect of Kannada, and so to lump all the Badagas in with all the Kannada speakers who lived in this District. This gave quite a large figure, but no indication as to how much of it was to be accounted for by Badaga speakers.

After two books were published by Christiane Pilot-Raichoor (who sadly passed away earlier this month), working in collaboration with me — namely “Counsel from the Ancients” (1988) and “A Badaga-English Dictionary” (1992) — I think it came to be accepted that Badaga is a separate language rather than a dialect of Kannada. 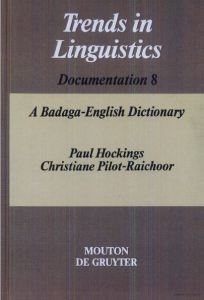 A dictionary documenting the language of the Badaga community of the Nilgiri Hills in Southern India, based on linguistic data recorded throughout the period from 1963 to 1990, and designed with the requirements of the non-native English speaker in mind. For such users, first, the method of transcription of Badaga words is phonetic, and bears no reference to either English or Tamil ways of transcribing the language. Secondly, several English words are commonly listed together as translations of one Badaga lexeme

What we see here is a not-unexpected drop-off in the rate of population growth. I say it was not unexpected (at least to me) for these reasons:
As spelled out in my book “Kindreds of the Earth” (Hockings, 1999), Badaga women in their fertile years began to adopt family planning from 1975 onwards, whereas before that date there was strong opposition within the Badaga commuity to that practice even though many people already knew about it. So from 1981 onwards one would expect the reduction in the rate of population increase that the censuses document, and a reduction in average family size.
In 1971 very few Badagas were living outside the Nilgiris District; for the most part, just a few hundred students at South Indian colleges. So the enumeration up to that census was an accurate reflection of the District’s Badaga population.

This book focuses on the household of the Badagas, a community that lives in the Nilgiri Hills in southern India. Paul Hockings reports his unique longitudinal study of this community, covering 27 years of measurement and sociocultural change in four sample villages, where he conducted censuses every nine years. Combining his knowledge of anthropology, demography, and linguistics, the author focuses primarily on demographic transition and social change over time. He also studies kinship, marriage, household structure, and various aspects of Badaga contemporary life, including the influence of the mass media

But in the half-century since then we have seen more and more Badaga families settling in large Indian cities elsewhere, as well as in North America, Europe and Australia, largely as a result of the scintillating opportunities to be found within the information technology industry. The fact that today a visit to almost any Badaga village shows a large number of homes either locked up or rented out to non-Badagas is a reflection of the new situation. The continuing low price for tea, together with high levels of education, jointly brought about this situation.

Badaga Christians may number today about 4,500, but it is difficult to be precise about their number. While nearly all Badaga Hindus still choose another Badaga for their marriage partner, according to custom, and speak Badaga, there is not such a strong tendency among the Christians, who quite often marry someone who is a Christian from elsewhere in South India. This means that such families may not have been enumerated in recent censuses as Badaga speakers if they were mainly speaking Tamil or some other language.

One must conclude therefore that if the census enumerated 134,514 in 2001 — an increase of only 0.0025% over the 1991 figure — any claim of a total of 400,000 is altogether baseless. It would require an increase in the rate of population growth that has not been seen in modern times even in the most explosive parts of Africa: an increase of something like 300% during the present century!
My very detailed study of four central Nilgiri villages over a 27-year period, spelled out in the 1999 book “Kindreds of the Earth” referred to above, found an overall “increase”, in families where the woman had completed her fertile years, of only 1.6 children per couple — hardly enough to maintain the population at its current level towards the end of the last century. This meticulous calculation, based on sixteen village-level censuses, was in fact borne out precisely by the 0.0025% rate of increase mentioned above.

Reduction of family size to where a couple has only one or two children is characteristic of modernization, as it allows the parents to concentrate their resources better on the care and education of the children do have. When I completed the 1999 study the rate in Japan was also 1.6 children per older couple, exactly the same as I found in the central Nilgiris.